Swedish Startup Space wrote about the Uppsala Hackathon back in June and I decided that I wanted to participate in this “gathering of programmers to collaboratively code in an extreme manner over a short period of time”.

The Uppsala Hackathon was attended by about 60-70 participants. Some people had teams and ideas before they arrived, but I had not found a team, so I joined one that consisted of the Valtech Consultants: Sara Ingmar, Daniel Lervik, Petter Norman and Sandra Nyström.

In the beginning of the hackathon we knew that we wanted to build an app that would help solve difficulties when using public transportation. To solve the problem, we needed to use a few different API’s. Instead of collecting information from different API’s and combing results on the mobile application itself – we decided to build our own API.

In doing so, we keep the amount of data down to a minimum which is good because traveller’s/commuters doesn’t always have high bandwidth networks available. We can also be confident that we are sending the correct information to the device and avoid wasting precious data. This also gives us the opportunity to extend our service with more public transport agencies while maintaining control of performance and bandwidth of the app. Another benefit of using your own API, is that it makes it extremely easy to build another app for another platform since we have full control of the API.

We chose to build the API on .NET because the team had most experience on the platform. Daniel had previously participated in a project at Valtech where ServiceStack was used to build the API. ServiceStack is an open source REST web services framework which had lots of good stuff we could use. To further speed up the development process we used AppHarbor to host the API.

The mobile app was going to use the API generated by the ServiceStack. Both Daniel and myself have previous experience of developing mobile applications, so we focused on this part. The API was consumed using RestKit, an amazing framework for dealing with RESTful APIs.

The mobile app was developed using CocoaPods, because there is no sane person that enjoys dealing with dependencies and build flags in Xcode. Enter SLussen, see the demo of the app in the video below.

Disclaimer: the lag you see in the film is because of the delay that appeared when doing screen recordings.

We won! The jury wrote the motivation:

The SLussen project helps commuting travelers to calculate total ticket prices when traveling through different zones in Stockholm county. This project has was picked for its potential value in Uppsala county.

Thanks Petter for a great summary of the backend!

I’ve been working on my first Phonegap project together with a friend the last week or so. He’s been developing most of the app for Android and Eclipse, and my job is to make sure it runs smoothly in iOS. It contains in-apps and some other goodies that I will post about later.

Since everything in Phonegap is a UIWebView, I needed a way to get rid of the silly previous, next and done buttons when focusing my keyboard. This uses private API:s so it will make your app rejected if you submit with this code. 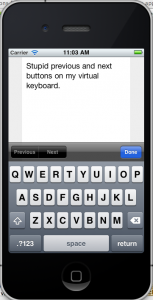 The solution is to modify your AppDelegate.m to something like this:

Remove and add focus on keyboard

When bringing a keyboard in and out, use the following to remove focus from it

And use this to bring focus to an input field: